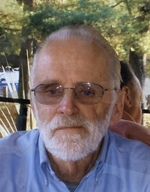 Andrew Stevenson, 88, of Enfield, entered into eternal rest on January 5th. He was the beloved husband to Ellen Cynthia (Etheridge) Stevenson. He was a communicate of Holy Family in Enfield.
Born January 1932 in Central Falls, RI. He was the son of the late Andrew Steele Stevenson and late Janet (McDowall) Stevenson.
He served his country proudly in the Air Force during the Korean War.
Andrew moved to his family from Pawtucket RI to Enfield in 1957. He worked for Pratt & Whitney followed by 32 years at Gerber Scientific.
Andrew loved spending time with his family and travelled to many New England vacation spots when the children were young. After retiring in1994, Andrew and Ellen went to Scotland (Andrew’s heritage), England and Ireland (Ellen’s heritage). They spent many summers with friends at Partridge Hollow campground in Monson, MA as well as much time as they could at Jehu Pond in Mashpee (Cape Cod) as well as numerous trips to Ogunquit, ME.
He ran the Falmouth and Manchester road races, loved racquet ball, tennis, and had an extensive wood shop for honing his woodworking skills.
Andrew married to the love of his life, Cynthia on August 29,1953. They were happily married for 67 years. They had four beautiful children; daughter Deborah Stevenson and her partner, Brian Bellefeuille, of North Carolina, and sons William Stevenson and his wife, Ellen, of Enfield, Paul Stevenson and his wife, Susan, of Ellington, and John Stevenson and his wife, Janine, of Stafford.
He had a dry sense of humor and you had to have your wits about you. He was always the gentleman, had a kind heart and was always willing to lend a helping hand to his family, friends and neighbors. But Andrew’s greatest blessings was his family; besides leaving his “kids”, he leaves his grandchildren: Katelyn Russell and her husband, Jay; Tom Kazukynas, Megan Hyndman and her husband Justin, Dan Stevenson and his wife Valerie, Ben Stevenson, Beth Stevenson and her partner Mikael, Allison Motyl, Bethany Baurle and her husband Drew, Andrew Stevenson and his wife Katie, Kyle Stevenson, Paul Phelps and his wife Johanna, and Jennifer Lewis and her husband Dan.
He also leaves his great-grandchildren: Owen, Nora, Elianna, Sadie, Remington, Jackson, Lucas, Zachary, Logan, Jack, Willa, Lilly and Jeter, Juliette and Analia.
Andrew will be especially missed by his sister-in-law Kathy Rucinski and her husband Jon.
Andrew was predeceased by his sister Margaret Stevenson Bedford and
brother Robert Stevenson.

The service and burial will be private. Memorial donations may be made to: APDA MA, 72 East Concord Street, Room C3, Boston, MA 02118