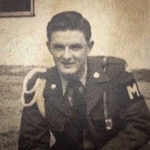 Edward James Dolinsky, 87, passed away Sunday, September 6, 2020 after a brief illness. Born December 27, 1932 in Hartford, CT to the late Stanley and Sophie (Zawadski) Dolinsky, Ed was the youngest of 7 children. Ed graduated from Weaver High School, class of 1951, and was drafted into the Army during the Korean war where he served as a Military Police Officer in Japan. After his honorable discharged from the Army, Ed returned to Hartford where he met and married his wife Lucille (Fortuna) Dolinsky on October 29, 1955. Ed is survived by his devoted wife of nearly 65 years Lucille and his daughters and their husbands; Wendy and Robert Atiyeh and Stacy and Gary Castle; his adored granddaughters Katie, Kristine and Kelsie Atiyeh and Beth, Sarah and Kimberly Castle. Ed was predeceased by his beloved son Edward Dolinsky, Jr. in 1993. Ed also leaves behind many nieces and nephews and his constant feline companion Mika. Ed retired from Hamilton Standard in 1999. He began his career at Hamilton on the shop floor as a sheet metal worker, shop foreman and retired as a cost engineer after 39 years with the company. During his career at Hamilton, Ed worked on many aircraft and space programs. While working on the Space Shuttle program he received the prestigious Silver Snoopy Award from NASA for his dedicated work on the program. Ed was a mentor for the Buzz Robotics Team #175 from its inception and continued to mentor the high school students long after retiring. During his retirement Ed put his carpentry skills to use volunteering with Homefront and helping with home repairs for disadvantaged families. Ed and his family enjoyed nearly 25 years at their camper at the West River Camperama Campground in Townshend, VT. Spending their summers with camp friends and his granddaughters around fires, playing bingo, and watching both the horseshoe competitions and the duck races on the river. Ed was an active member of the Enfield community in the 1970s and 1980s and was a member of several town committees including the Planning & Zoning committee, Housing Authority and the John F. Kennedy Middle School building committee. Ed was also a member of several local social clubs including the American Legion Post 80, Enfield Elks Lodge #2222 and The Greys Club.The family would like to extend their heartfelt thank you to Dr. William Waldman of Stafford and his staff for the decades of care of Ed and to the staff of Parkway Pavilion for the compassionate care they showed Ed during his final days.Ed was predeceased by his parents, brothers Luis and Paul and sisters Helen, Mary, Sophie and Margaret. Arrangements will be private and at the convenience of the family. A Mass celebrating Ed’s life will take place next summer. In lieu of flowers, donations in Ed’s memory can be made to the American Cancer Society. For online condolences, please visit www.leetestevens.com.