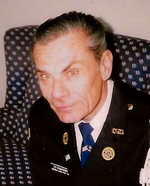 Edward Walter Dubanoski, 83, of Enfield, husband of the late Claire Amelia (Zawistowski) Dubanoski, passed away peacefully Tuesday, July 21, 2020, at Evergreen Healthcare in Stafford. Born and raised in the Rockville section of Vernon, Ed was one of four children of John and Josephine (Hopowiec) Dubanoski. He lived in Enfield for 60 plus years where he and Claire raised their family and were parishioners at St. Adalbert Church of St. Raymond of Penefort Parish. Ed served his country honorably in the U.S. Army during the Korean War and was a longtime member of the John Maciolek Post #154 American Legion. Ed began his professional working career as an engineering apprentice at Royal Typewriter. After earning his Engineering Degree Ed was employed at Hamilton Standard where he worked on the Apollo Spacesuit program. He later retired from Bussman Mfg. ,and following, started another career driving school buses for Smyth Bus Co. He loved dancing, polish food, polka music and was musically gifted playing the accordion, piano and the harmonica. Ed shared his musical talents by entertaining his family, many friends and the residents of Parkway Pavilion for many years. His fix-it abilities were unmatched, always having that special tool or “special stuff” to repair anything. Long walks and riding his bicycle were part of his everyday events. He also enjoyed camping and vacationing with family and friends at Strawberry Park in Preston, CT. Ed was truly devoted to his loving sweetheart Claire and a great role model to his family and many friends his entire life.
Ed is survived by his three beloved sons, Michael of Enfield, Steven and his wife Donna of Enfield, and Scott and his wife Kim of Somers, four grandchildren, Thomas Edward & his wife Kayleigh, Kevin John, Erika Rose, and Allison Claire Dubanoski, a brother, Thomas Dubanoski of NJ., a very dear friend Rose Masamery and several nieces and nephews. Besides his wife, Ed was predeceased by his brother Joseph Dubanoski and his sister Angela Burke.
Services and burial will be private and held at the family's convenience. Donations in Ed's memory may be made to the John Maciolek Post 154# American Legion, PO Box 154, Enfield, CT 06083. To leave online condolences, please visit www.Leetestevens.com