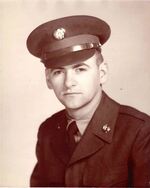 Ernest Sroka, 88, formerly of Enfield, CT, passed away due to congestive heart failure on Friday, December 4, 2020, at the Reserve in East Longmeadow, MA, where he has resided the past two years. Ernest grew up in Chicopee, MA, later settling in Enfield, CT, where he raised his family alongside his late wife, Mary Ann Sroka. Ernest proudly served our country in the United States Army during the Korean War. Following his time in the Army, he and his father opened Ernie and Joe’s Service which began a 60+ year career in the auto parts industry. During this time he managed Ferrara Auto Parts in Chicopee, MA, later retiring from NAPA in Holyoke, MA, at the age of 85. He was a lifetime member and sat on The Board of Directors for many years at the Chicopee Falls Polish Home Association where he enjoyed the time socializing and being with his friends. Ernest loved working on cars, Polish dancing with his wife, and hunting with his buddies. Family trips to York Beach in Maine created many fond memories for him. He especially enjoyed time spent with his four legged companions, Ozzie and Stasiu. Ernest is survived by his three daughters, Mary Anne Weseliza, Betsy Rinaldi, her husband, John, and Sally Sroka, all of Enfield; two adored grandchildren, Therese and Steven Rinaldi; a sister, Cecelia Fitzek and her husband, Earl; and a beloved nephew, Steve Fitzek and his wife, Ann. He was predeceased by his wife, Mary Ann (Wroblewski) Sroka and a brother, Chester Sroka. Relatives and friends are invited to join the family for a graveside service on Tuesday, December 8, 2020 at 11:30 am at St. Adalbert Cemetery, Belmont Ave., Enfield, CT 06082. Donations in memory of Ernest may be made to the Enfield Animal Shelter, 60 Parsons Rd., Enfield, CT 06082 or to the ASPCA.