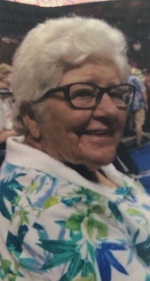 Jeanne (McGuire) Smith, 92, wife of the late Howard W. (“Buddy” or “Red”) Smith died on Friday, September 18, 2020. Jeanne was a lifelong resident of the Hazardville section of Enfield. She was born on Monday, March 19, 1928 to William J. and Beatrice (Pierce) McGuire. Jeanne graduated from Hazardville Grammar School and attended Enfield High School. As a child she worked on her uncles’ Pierce farm on Abbe and Town Farm Roads and then worked for many years at E.C. Allen’s general store on Main Street in Hazardville. Jeanne and Howard grew broadleaf tobacco and potatoes on their farm for many years, later switching to sweet corn and vegetables and running a roadside stand. After Howard’s passing, Jeanne ran a greenhouse operation, growing and selling vegetable and flower plants with help from her good friend Judy Locke, and retired from that at age 75.
Jeanne was raised in the Hazardville United Methodist Church and after her marriage to Howard in 1952 was a faithful parishioner of Saint Mary’s Episcopal Church, now Holy Trinity Church, and served at one time as a member of the vestry. She was a member of the Connecticut Farm Bureau and had been a member of the Enfield Republican Town Committee. After her retirement she joined the Enfield Senior Center, where she exercised and made many new friends who were very good to her and became as dear to her as her many lifelong friends. Jeanne loved to travel and visited many countries on several continents. She was a fan of the UConn Women’s Basketball team, having been brought to many games by Vanessa McGuire and her good friend Joyce Henderson.
Jeanne was predeceased by her sisters Eunice Downton and Mildred Doreski and brothers William McGuire and John McGuire, her niece Miriam Vandersea, her nephews Donald Smith and Peter McGuire and her cousins, Pearl (Burrows) Miller and Lois (Pierce) Osier. She is survived by her sister Roberta DeCaro of Enfield and her brother Thomas McGuire, Sr. of Stafford, and nephews and nieces William Doreski, Michael McGuire, John DeCaro, Lynn Pyrcz, Thomas McGuire, Jr., Nancy Hill, David McGuire, Robert McGuire, Karen Bradway, Edward McGuire, Marie Sciullo, Timothy McGuire and Mark McGuire, and several great and great, great nieces and nephews.
Her family will receive friends on Wednesday, September 23, from 2-4 PM at Leete-Stevens Enfield Chapels, 61 South Rd. Enfield. A Graveside Service will take place on Thursday, September 24, at 11:00 AM at Hazardville Cemetery. Everyone is asked to meet at the gravesite. MASKS AND SOCIAL DISTANCING ARE REQUIRED AT THE FUNERAL HOME AND CEMETERY.
In lieu of flowers, memorial donations may be made to the Holy Trinity Episcopal Church, 383 Hazard Avenue, Enfield, CT 06082
For online condolences, please visit www.leetestevens.com.