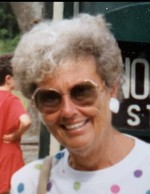 Joan E. (Jache) Allen, 88, of Windsor Locks, beloved wife of the late Frederick E. Allen, Jr., passed away on Saturday, August 29, 2020 at the Suffield House. She was born in Warwick, RI on October 4, 1931, the daughter of the late Irving and Mary (Meanerhon) Jache.
A graduate of Rhode Island College, Joan enjoyed a long and rewarding teaching career at North Street Elementary School. Former students confirm that Joan was a beloved and respected educator, role model (fashion and otherwise), and friend, with some votes for favorite teacher ever. Joan and Fred for many years enjoyed winter escape to sunny Naples, FL, and spent most of their summer months in her beloved Rhode Island.
Joan is survived by two sons, Peter Allen and his wife Laura of Chicopee, MA, and their children Zachary and Elizabeth, and Stephen & Jessica Morin; and by Michael Allen and his wife Christina of Broad Brook, CT, their son Seth Allen and his wife Ashley of Simsbury, CT, their children daughter Aubree, and son Bennett, and by their daughter Jamie Allen and Johnny Simon Jr of Brooklyn, NY. In addition to her loving husband Frederick, Joan was predeceased by her sister, Lillian Kennedy. In her later years, Joan faced Alzheimer’s with grace and courage, never losing her sense of humor. More grateful we could not be to everyone at The Suffield House for their kind and caring service.
Services will be private, at the convenience of the family. Donations in Joan’s memory may be made to the Alzheimer’s Association, 200 Executive Boulevard, Suite 4B, Southington CT 06489. For online condolences, please visit www.windsorlocksfuneralhome.com.