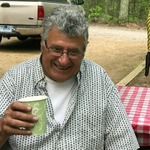 John R. Mazza Sr. 88, of East Windsor, died after a brief illness on Wednesday, Nov. 4, 2020.
John was born in Hartford, son of the late Joseph Mazza Sr. and Louise (Simoncelli) Fiore. He went on to serve our country during the Korean War with the U.S. Navy. John enjoyed working with the public whether during his years at Aetna, as a beloved butcher at Chester’s Supermarket, the years he spent at Capitol Candy or LEGO, as a Sunday School Teacher, or the brief time he spent as the Vice Chairperson of the East Windsor Water Commission. He spent his spare time camping, and tending to his garden; giving him great joy to keep friends and family well provisioned with fresh seasonal vegetables.
John is survived by his siblings Mary Belval of East Windsor, Jane and Anthony Benedetto of Holland, MA, and Michael Fiore of East Windsor. He is also survived by his children Margaret Redfern of Enfield, John Mazza Jr and his wife Elizabeth of Enfield, Debra Mazza and her partner William Morin of Windsor Locks, and Tina Chesworth and her husband Bruce of Ellington. He also leaves behind his grandchildren Tracy (Brown) Mercier and her husband Todd, Aaron Brown, Dylan Chesworth, Brandon Chesworth, Justin Mazza, Michael Mazza, Kelly Mazza, and his two great grandchildren Travis and Owen. John was predeceased by his wife Margaret (Hunt) Mazza, and his siblings Joseph Mazza II, and Anthony Mazza.
A loving and devoted husband, father, grandfather, great-grandfather, and friend to many John will be dearly missed and forever remembered for instilling how to balance work, family, and fun; his exuberant story-telling; and graciously welcoming all into his heart and home.
The family will hold a private service at a later date. In lieu of flowers, the family asks for donations to the ASPCA. For online condolences and online guestbooks, please visit www.leetestevens.com