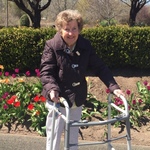 Margaret Gawlicki, 96, of Suffield, formerly a long-term resident of Enfield, entered into Eternal Rest Tuesday, September 15, 2020. She was born in Queens, NY, on July 21, 1924, one of seven to the late Joseph and Francis Gaynor. She was a dyed-in-the-wool New Yorker, despite living in Connecticut for over 50 years. Margaret was a faithful parishioner of Holy Family Church, a member of the church Women's Guild, and often helped plan Guild-sponsored NYC theater trips. She enjoyed gardening and flowers of all kinds, especially African Violets. Margaret was a people person. She enjoyed socializing and will be missed by her many friends, who would often go to her to find out the latest neighborhood information. Margaret enjoyed taking after dinner walks around her neighborhood, which usually resulted in her being gone awhile as she stopped to greet everyone along the way. After moving to Suffield by the River, residents relied on her to request "New York, New York" at its many musical gatherings. Sunday dinners with her famous cheesecake were a staple in her family's household as she adored the time she spent with them. She will be remembered as a loving and dedicated friend, mother, grandmother and great-grandmother. Margaret is survived by her three children, Ted Gawlicki and his wife, Mary, of Storrs, Pat Pellettier and her husband, Bob, of Ellington, and Scott Gawlicki of Jackson Heights, Queens; three grandchildren, Marisa Heimgartner and her husband, Jay, Emily Potz and her husband, Tyler, and Matthew Gawlicki and his wife, Lauren; and great-grandchildren, Emma and Jack Heimgartner and Russell Potz. She was anxiously awaiting the arrival of a new great-grandson, Tommy Potz. In addition to her parents, she was predeceased by her beloved husband, Ted Gawlicki. Due to the current public health crisis services and burial will be held at a later date. The family would like to extend a special thank you to the staff at Suffield by the River and VITAS Hospice for their kindness, care and compassion. Memorial donations made in honor of Margaret may be made to the Fidelco Guide Dog Foundation, 103 Vision Way, Bloomfield, CT 06002 or to the Alzheimer's Association, 200 Executive Blvd S #4b, Southington, CT 06489.