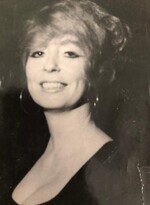 Maureen Mourning Calabrese, of Suffield, beloved wife of the late William C. Calabrese, passed away on Tuesday, December 22, 2020, at home, surrounded by her family. Maureen was born on May 24, 1932 in Branford, Connecticut. She was the daughter of Morris Mourning and Edna Swirski Mourning. She grew-up in the Fourth Ward neighborhood of Branford, where her father worked in the foundries of that neighborhood. At the age of nineteen years, she married William C. Calabrese of Short Beach, Branford. In her young adult years, she worked as a secretary at Yale University, and with other organizations. After several years of work, she became a full-time housewife. At about that time, she moved to Short Beach, where she lived most of her life on Page’s Cove, which she and her husband loved dearly. There, she raised her two sons, William M. Calabrese of Suffield, and Edan F. Calabrese of Berlin, Connecticut.

Maureen was loved by all, and she was a tremendous athlete: swimming, field hockey, and basketball. She will be remembered for her utter beauty, her ability to connect with people, her love of animals, and her unbelievably high and optimistic outlook on life. In her latter time on earth, her courage and resiliency were unparalleled. Maureen lived the last decade of her life in the warm and loving home of Bill, Donna, and Kendall.

A graveside service honoring Maureen's life will be celebrated at 11 am on Wednesday, December 30, 2020 at St. Agnes Cemetery, River Walk, Branford, CT. A memorial mass will be conducted for Maureen upon a later date. For online condolences, please visit www.leetestevens.com.