To share your memory on the wall of Richard Lagasse, sign in using one of the following options:

Rich grew up in Coventry, RI but spent the majority of his life in Enfield where he and Barbara raised their two sons. He was a graduate of the University of Rhode Island, followed by a successful 30-year career with The Hartford as an Executive Officer. He was a man of strong Catholic faith and values which he passed on to his family in many ways. As a husband, he and Barb were inseparable best friends with many common interests, starting with their values and family. As a Dad, he spent countless hours with his sons teaching, guiding, encouraging, pushing them to do “extra,” and just being there. As a grandparent, he was fortunate to be an integral part of his three granddaughters’ lives while they grew up, and loved them dearly. He gave his family all they ever needed during his life, and that is his legacy. He will be greatly missed.

Rich had many passions and interests. He loved camping with his extended family for over 40 years, including many memorable family trips around the country and weekends at their favorite local campground, Partridge Hollow. Rich was incredibly skilled at building things, including intricate woodworking, home projects, anything mechanical, and his favorite personal passion, classic Corvettes. After retiring, Rich began restoring vintage corvettes and became a judge for the National Corvette Restoration Society. He later got to live his dream by designing and hand building custom vintage Corvettes which were featured in several national magazines and won many “best in show” awards across the U.S. and Canada, most notably the Judges’ Choice award at the prestigious Detroit Autorama Riddler competition. Even more so, he enjoyed hanging out at local car shows with family and friends, especially Mark’s Cruise Nights where he helped coordinate the annual “Corvette Night.”

We would like to express very special thanks to all the doctors and nurses at the Harry Gray Cancer Center for their exceptional care and loving support. A visitation will be held as well as a Mass of Christian Burial that will be open to family and friends. Please contact the family for further information if you would like to attend. Memorial donations may be made to Saint Martha’s Church in Enfield, CT, the American Cancer Society, or St. Jude’s Children’s hospital.
Read Less

Print
For details on visitation and service times, please contact the family at richsclassiccorvettes@cox.net. Masks will be required for all attendees.

We encourage you to share your most beloved memories of Richard here, so that the family and other loved ones can always see it. You can upload cherished photographs, or share your favorite stories, and can even comment on those shared by others.

The Collins Finance Team, The Goff Family; Bob & Kathy, Nancy & Brian, Ed , and other have sent flowers to the family of Richard Ambrose Lagasse.
Show you care by sending flowers

Posted Jul 31, 2020 at 02:00pm
We were so sorry to hear of Richard's passing. We pray you are comforted by memories. May your loved one be granted eternal peace in the loving embrace of God. With sincere sympathy, Nancy and Steve Whalen
Comment Share
Share via:

Posted Jul 28, 2020 at 06:43pm
Dear Lagasse family, I remember the day I met Rich and Barb at Bart's Drive In cruise night. That was 18+ years ago, and from that day on wherever I saw them at a cruise, Mark's , Bart's or others they spoke and had the time to converse. I have never met a man more giving of his time offering suggestions on things I was attempting on my own Corvette. Please accept my sincere condolences, he will be missed.
John and Mary Gracewski, Windsor, cT
Comment Share
Share via:
MH

Posted Jul 28, 2020 at 01:19am
Barbara and family, It is with great sadness to hear of Richards passing. We shared a common interest in building "Custom Corvettes". I first met Rich at the Corvette Center as they were working on our Corvettes at the same time. You might recall your husband and I were taking a different path from the restore to stock movement that was the norm at that time. You and Rich were at the forefront of the "Pro-Touring" movement and as you know now the quality of your first car and the others you had built became the benchmark for all others that followed and to be judged by. The cars you and your husband built were pure automotive art as proven by all the major awards that were the result of the thousands of hours of effort you and your husband put into the planning and completion of each car. I clearly recall seeing the first car's completed frame, completely assembled with the engine, wheels, everything except for the body. The quality and detail of the work completed it was a master piece. I said to the owners of the Corvette Center you could just enter this into any car show and it would win without the body. It was truly amazing. Most people work hard in their life but only a few are in a position to do something they really enjoy that results in realizing their dreams and passion. I enjoyed meeting and knowing you both and seeing you at the shows. I'm going to miss Richard and I hope to see you again at Marks.
My sincere condolences to all in your family,
Martin (Marty) Hainsey & family
Bolton, Ct
Comment Share
Share via:
JR

Posted Jul 27, 2020 at 01:32pm
Chris and family,
I was so sorry to learn of your father’s passing. I hope you are comforted with the memories of good times and your shared interests. My mom passed away just two weeks ago, and imagine we share the comfort of knowing our parents are now at peace. You are in my thoughts and prayers.

Posted Jul 27, 2020 at 09:50am
Barbara, Chris and Diane, Michael, and family,
Please accept our most sincere condolences for the loss of your beloved Richard. We know this is an incredibly difficult time for all of you; and we are glad that you all are so close so that you can lean on each other.
Richard was a wonderful family man, and he left this world knowing you all were his proudest legacy.
with sympathy and love, Joe and Marge
Comment Share
Share via: 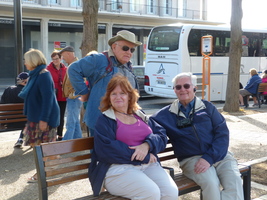 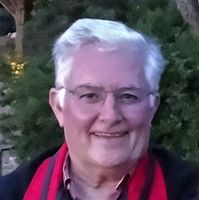 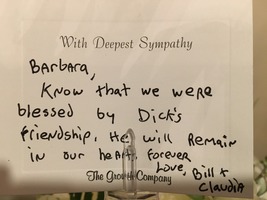 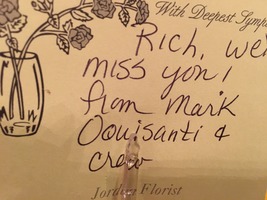