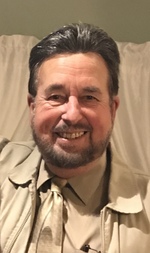 Robert G. Herron, (Bob) 72, of Enfield, husband of Marianne “Reggie” (Ruggiero) for 31 years, passed away unexpectedly at home, Monday Dec. 21, 2020. The son of the late Robert and Dorothy (Groves) Herron, Bob was a lifelong resident of Enfield growing up in the Scitico section of town. He dedicated 40 years to the banquet and reception industry and later worked as a tax-preparer for the past 12 years. Bob loved all sports, he was an avid NY Yankees, NY Giants, and UCONN basketball fan. He enjoyed playing softball and was still pitching up into his sixties. He also enjoyed fantasy football, gardening, and he loved his adoring cats Rosie and Maggie.
Besides his wife Marianne, Bob leaves three sons, Sean Herron and his wife Kaley of Enfield, and their children Andrew, Alex, and Arabella, Scott Herron of San Diego, CA and his daughter Ashley, and Christopher Herron and his wife Patricia of Charlotte, NC, and their children Victoria, Julia, and Zack, a sister, Patricia Coffey and her husband Alan of Southington, CT. He is also survived by his beloved mother-in-law Anne Ruggiero, his sister-in-law , Phyllis Darby, a brother-in-law and sister-in-law Luke and Laura Ruggiero, and his best friend Dave Arel of Feeding Hills, MA. He was predeceased by two sisters, Jane DeGruttola and Diana Ramsdell. Bob was a wonderful, caring, and kind man who was loved by so many.
A Funeral Mass will be held at Holy Family Church of St. Jeanne Jugan Parish at a later date to be announced. In lieu of flowers, donations in Bob's memory may be made to Feral Cats of East Windsor, C/O Russell Bergeron, PO Box 198, East Windsor, CT 06088.