Obituary for Roger A. Nadeau 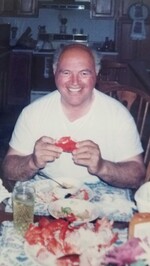 Roger A. Nadeau, Sr., 90, of Windsor Locks, a man with a gentle soul and loving heart, departed this life on Saturday, July 11, 2020. Born and raised in Van Buren, Maine, Roger was one of eight children born to the late Louis and Anna (Thibodeau) Nadeau. He was a proud Army veteran, always eager to share his Korean War experiences to anyone who asked. His dedication to work was very evident by his forty years at Wiremold of West Hartford. He was happily married to the love of his life, Katherine Martocchio Nadeau for 34 years until her passing in 1992. Roger was the ultimate fun loving guy, whether it be on the dance floor doing the Jitterbug or enjoying a good camping/ swimming vacation with the family. He was an avid sports fan but his heart belonged to the Red Sox. His greatest pleasure was watching his grandchildren and great grandchildren playing as they tried to include him. No one loved homemade pizza and spaghetti and meatballs more than Pops. His famous "Cross arm handshake" was felt by all who loved him. Roger is survived by his four children, Roger Jr. of Windsor Locks, Richard and his wife, Rhonda, of Windsor Locks, David and his wife, Marcy, of Colorado, and Dorothy Danner of Windsor Locks; nine grandchildren, Krystin, Andrea, Elizabeth, Alaina, Nicole, Kristopher, Justin, CJ, and Katie; thirteen great grandchildren, Reid, Brennan, Emylee, Natalie, Noelle, Evan, Lena, Grace, Daniel, Chase, Karlie, Aryelle, and Connor. He also leaves behind a brother, Joseph, and sisters-in-law, Joan and Rita. He was predeceased by brothers, Leo, Ferdinand, and Carmen; sisters, Lillian, Doris, Pricilla. His greatest loss was his beloved grandson, Eric. He is now "flying in the stars" with him. Relatives and friends are invited to join the family for calling hours from 10-11 am on Friday, July 17, 2020 at the Windsor Locks Funeral Home, 441 Spring St., Windsor Locks, CT. A service will begin at 11 am, followed by burial at St. Mary's Cemetery. In lieu of flowers, donations in Roger's memory may be made to the Connecticut Children's Medical Center Foundation, 282 Washington St., Hartford, CT 06106.