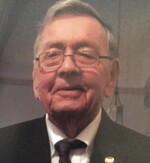 Rudolph M. DesRoches, 90, of Windsor Locks, beloved husband of 59 years to the late Lola P. (Lavoie) DesRoches, passed away peacefully on Thursday, August 6, 2020, with his family nearby. Rudolph was born Dec. 6, 1929, in Bridgeport, the son of the late Emile and Alice (Drouin) DesRoches.
Rudy enjoyed the outdoors. In his early years, he excelled at scouting, rising to the level of Eagle Scout. Rudy proudly served his country in the United States Army, serving as Corporal during the Korean War. He served as a Firefighter for the town of West Hartford for 31 years, retiring as Lieutenant. He became the WHFD’s historian, compiling the complete works of the fire department found in the West Hartford library today. He was an avid fisherman and also enjoyed tending to “his birds”. Rudy was a devoted Catholic and long-time member of St. Robert Bellarmine church where he served as Eucharistic minister for many years. He was a long time member of the American Legion, the Veterans of Foreign Wars, and the Knights of Columbus.
Rudy’s family was everything to him. He is survived by his children, Sharon Moore and her husband, Bill, of Newington, Steven and his wife Terri (Bruner) of Tolland, Paul and his wife Christine (Doherty) of East Windsor, Gina Maliga and her husband, Garry, of Suffield, Mary Breault and her husband, Jim, of East Hartford, Tom and his wife Mary (LeBel) of Windsor Locks; his grandchildren, Julie, Seth and his wife Michelle, Scott and his wife Lacey, Emily, Stephanie and her husband Ian, Alyssa and her husband Colin, Taylor, Ryan and his wife Ashley, Meg, Henri and Roy; and his great grandchildren, Rebecca, James, Lily, Madelyn, Norabelle, Anastasia, and Everett, and his close cousins, Joseph and his wife Cathy.
There are no calling hours. A Mass of Christian Burial will be celebrated for Rudy at 10 am on Tuesday, August 11, 2020 at St. Robert Bellarmine Church, 52 S. Elm St., Windsor Locks. Burial with military honors will follow in St Mary’s Cemetery. For online expressions of sympathy or directions please visit www.windsorlocksfuneralhome.com