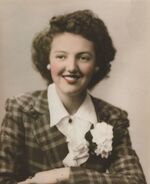 Shirley O’Brien, 94, of Enfield, CT died peacefully in her home on November 24, 2020 with her loving son David by her side. She was predeceased by her husband John.
Shirley was born October 31, 1926 in Manchester, CT. She worked at Pratt & Whitney for many years. She later was a proud daycare worker who instructed children to use a fire escape and bake Irish soda bread. Her students referred to her as Grandma Shirley for as long as they knew her.
Shirley enjoyed baking, sewing, and dancing. She frequently accompanied her cousin, a session musician, to tapings of “The Jackie Gleason Show” in New York City. Shirley fondly recalled getting into a pie fight with Carol Burnett and Betty White along with meeting her idol Johnny Mathis.
Besides her son David, Shirley leaves behind her sister Ginger Dimock of Ashford, CT. She is also survived by her son Richard Jerome of Louisiana and daughter Laurie O’Toole and her fiancé Ed Lynch of Arizona along with several grandchildren, great-grandchildren and nieces and nephews.
David would like to thank the many friends who Shirley considered family for their compassion and help during her twilight years, especially Shirley's hospice nurse, Robin who went above and beyond to make Shirley comfortable.
There will be no services.
Because Shirley was an animal lover, memorial donations may be made to the CT Humane Society, 701 Russell Rd, Newington, CT 06111.
For online condolences please visit leetesetevens.com.