Obituary for Thomas A. Clark 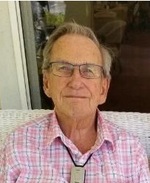 Thomas A. Clark, 89, of Stafford, passed away peacefully on Sunday, August 9, 2020 at Woodlake at Tolland. Born on April 29, 1931, he was the son of the late Dudley and Alma (Agar) Clark and grew up in Somers. He lived in Stafford until 1987 before moving to Bent Creek, VA. Thomas and his wife Eileen spent time between Virginia and Florida in retirement. Thomas served his country honorably in the US Army during the Korean War. He worked as a Corrections Officer for the State of Connecticut before becoming the Director of Maintenance for the CT Department of Corrections, retiring after 20 + years. In his earlier years, he enjoyed hunting and fishing, spending time in the outdoors, and along with his wife traveling the country in retirement. Besides his wife Eileen, who predeceased him in 2012, he was predeceased by his son, Glenn Clark; 3 brothers; 1 sister; and 1 grandchild. He leaves 3 loving children, Thomas Clark, Jr. of Somers, Diane Hassman and her husband William of Stafford, and David Clark and his wife Terry of Stafford; as well as 3 grandchildren and 5 great-grandchildren. A Graveside service will take place on Saturday, August 15, at 10:00 AM at Somers Center Cemetery, Battle St., Somers. Somers Funeral Home has care of arrangements. For online condolences, please visit www.somersfuneralhome.com.