To share your memory on the wall of Thomas Wieliczka, sign in using one of the following options:

Provide comfort for the family of Thomas Wieliczka with a meaningful gesture of sympathy.

Receive notifications about information and event scheduling for Thomas

We encourage you to share your most beloved memories of Thomas here, so that the family and other loved ones can always see it. You can upload cherished photographs, or share your favorite stories, and can even comment on those shared by others.

Posted May 05, 2020 at 12:58pm
My sincerest condolences to Tom's family. My father was his neighbor in Suffield House for a while. We became friendly with Tom and would stop in to see him also when we'd visit. We'd bring our little dog and have a lovely visit with Tom. He was such a kind, inspiring man. He even kept my Dad in line when my Dad would get frustrated with his situation. Tom could do that because he faced adversity his entire life and clearly did so with grace, dignity and respect for those around him. Tom will be sorely missed in the Suffield House. He was like the Mayor. Sincerely, Diane Lopes and my daughters (and our little dog,Max)
Comment Share
Share via:
SH

Thank you Diane for your kind words and for the friendship you established with Tom during his residency at the Suffield House. In spite of all of his physical challenges he made the most of his life and inspired others to do the same. On behalf of my family I thank you, your daughters and little dog Max for taking the extra time to visit with my brother. It means more than you know. Stay safe and stay well.

Posted Apr 29, 2020 at 12:39pm
So sorry to hear that Tom succumbed to this terrible virus, he had been through so much in his lifetime and persevered through all his health problems with grace. He was truly a person who made the most of what talents God bestowed upon him and was an inspiration to us all. May you all find comfort in your memories of Tom.
Gail LaTorra
Comment Share
Share via:
SH

Thank you for your kind words Gail. I will be sure to pass on your message to my dad.
SM

Posted Apr 27, 2020 at 02:51pm
I am so very sorry to hear of Tom's passing. He was a first cousin to my father, the late William Wieliczka. My prayers are will all of the Wieliczka family.

Thank you Sharon. Your words of comfort mean so much to us. I will pass on your message to my dad
SH

Thank you Sharon. Your words of comfort mean so much to us. I will pass on your message to my dad
BD

Thank you Bill and Terry. We appreciate your prayers and words of comfort. I will pass your message on to my dad. Hugs
BM

Posted Apr 27, 2020 at 01:00pm
I extend my sincere condolences to the Wieliczka and Hannigan extended family. As a teacher at WL High School I was fortunate to have young Tom as a student. It is no exaggeration to say that he, in his 4 years at the high school graduating in 1972, was an inspiration to his fellow classmates and to the faculty that taught him. My memories of Tom are numerous as he exhibited true grit and a love of learning. Again, I and my wife Pam extend our sincere condolences in your loss of such a fine man.
Sincerely,
Brian & Pam McKeown
Comment Share
Share via:
SH

Hello Brian and Pam. Thank you so much for the memories you shared. He was a remarkable man with determination to conquer any of the challenges life presented. Thank you for your words of comfort. 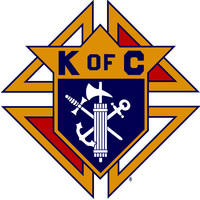 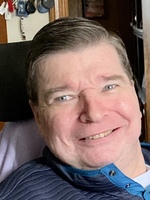 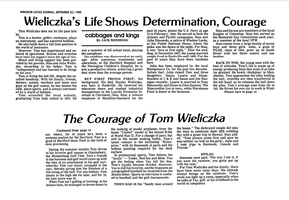