In Memory of
Vincent
Valela
1927 - 2022
Click above to light a memorial candle.
Memorial Candle Tribute From
Leete Stevens Enfield Chapels & Crematory
"We are honored to provide this Book of Memories to the family."
View full message >>>
Send Flowers
Menu

In the event that there is an error
in the information presented,
please contact the funeral
home by clicking here. 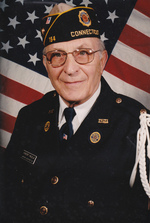 Vincent Valela, 94, of Enfield, passed away peacefully on Saturday, March 5, 2022 at Johnson Memorial Hospital. Born in Brooklyn, NY on July 18, 1927, he was the son of the late Vito and Sadie (Collura) Valela and grew up in Brooklyn. He joined the US Army and served during World War II and Korea, being honorably discharged in 1955. While overseas he met and married Margarete (Kloess) and they enjoyed 64 years of marriage before her passing in 2012. Upon discharge, he began a 32-year career with United Airlines, retiring as a Ground Supervisor in 1987. They raised their family between Boston and New York and moved to Enfield in 1986. Vincent was a proud Army Veteran, longtime member and Chaplain of the John Maciolek American Legion Post #154, a member and volunteer of St. Bernard’s Church, Enfield, and a member of the Mount Carmel Society in Enfield for many years. He loved to cook, especially his "authentic" tomato sauce, traveling all over the world, enjoyed doing many kinds of puzzles, and was active in the Enfield Senior Center and the Somers Cultural Commission. He was an avid UCONN Women’s Basketball fan and Red Sox fan. A dedicated Veteran, devoted husband, father, grandfather, and friend, he will be truly missed. Besides his parents and wife, he was predeceased by his brother, Michael Valela. He leaves to cherish his memory his daughter, Vicky Stacey and her husband Robert of Enfield; 2 granddaughters, Christina Stacey and Theresa Luersen (Eric); a great-granddaughter, Cassandra Rose Stacey; a great-great-grandson, Robert Daniel; his sister Theresa Garguilo; and his special friend and companion Ann Levesque. His family will receive friends on Friday, March 11, from 12:00-12:30 PM at Leete-Stevens Enfield Chapels, 61 South Rd. with a Mass of Christian Burial taking place at 1:00 PM at St. Bernard Church, Enfield. Burial with Military Honors will follow in Hazardville Cemetery. Memorial donations may be made to the John Maciolek American Legion Post 154, P.O. Box 154, Enfield, CT 06082. For online condolences, please visit www.leetestevens.com
Order Flowers
Printable
Share on Facebook
860-749-2244
Leete Stevens Enfield Chapels & Crematory
61 South Road
Enfield, CT 06082
Fax: 860-763-2815
Email: leetestevens@gmail.com
860-749-8413
Somers Funeral Home
354 Main St
Somers, CT 06071
Fax: 860-763-2815
Email: leetestevens@gmail.com
860-623-3498
Windsor Locks Funeral Home
441 Spring St
Windsor Locks, CT 06096
Fax: 860-623-9387
Email: leetestevens@gmail.com