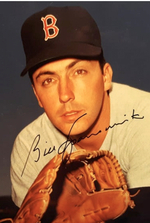 William H. Spanswick Jr. (Crow) passed away peacefully on December 2, 2020, in Naples, FL. Bill was born to the late Isabelle (Lockwood) and William (Harry) Spanswick in Springfield, MA, on July 8, 1938. From an early age Bill was recognized in his hometown of Enfield, CT, as a standout at basketball and baseball. After graduating from Enfield High School, Bill made his way to Holy Cross College on an athletic scholarship. The next year he was scouted by the Boston Red Sox, and he signed a contract with the team in 1958. Bill played professional baseball for several teams for the next nine seasons. During this time he served in the U.S. Marine Corps from 1959 to 1964. In 1967 Bill made the decision to retire from baseball and return to Enfield to raise his family.

After his time in baseball, Bill worked in the transportation industry for thirty years, eventually forming Spanswick Associates. Throughout his life Bill was an avid sports enthusiast. Because he loved his hometown of Enfield and always considered that he was privileged to have been raised there, he was active in Enfield Youth Sports, coaching many teams through the years. Bill remained passionate about baseball and never passed up the opportunity to share an old story or to offer advice to young players. He was honored to become a member of the inaugural class of the Enfield Athletic Hall of Fame in 1996.

Bill enthusiastically attended his grandchildren’s sporting events when he was in CT, and in his free time he enjoyed golf and fly fishing. Bill was always a dog lover, and his cocker spaniel, Molly, provided many hours of comfort and companionship in his final days.
Bill leave behind his wife, Bonnie (Ryan) of Naples, FL, and his children: Linda of Bristol; Susan Sevigny and husband, Dave, of Rocky Hill; Billy and wife, Jessica, of Enfield; and Bobby and wife, Beth, of Ellington; step-daughter Heather Caban and husband Hasoo Hwang of Seoul, South Korea; mother-in-law Marion Ryan; and grandchildren: David, Julia, Matthew, Jack, Ethan and Alannah. Bill is also survived by his brother and best friend, Jim (Sparrow) Spanswick, sisters Barbara (Vane) and Nancy, as well as several nieces and nephews. Bill was blessed with many wonderful friends in Enfield, including John Normile. His family would like to thank especially Dick Gauvreau for his friendship and support over the years.

Due to the Covid pandemic and resulting travel restrictions, funeral services for Bill will be held at the convenience of the family in 2021. Memorial donations in his memory may be made to Little Sisters of the Poor, St. Joseph’s Residence, 1365 Enfield Street, Enfield, CT 06082. To leave online condolences, please visit www.Leetestevens.com. To read more about Bill's Professional Baseball career, please visit the Enfield Patch at
https://patch.com/connecticut/enfield/bill-spanswick-dies-enfields-only-major-league-baseball-player