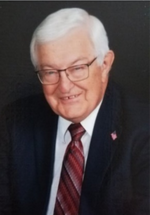 William Edward Knapp, 82, of Zephyrhills, FL (formerly of Binghamton, NY) succumbed to cancer surrounded by his family on December 7, 2020.

William graduated from Binghamton Central High School and the joined the Air Force, where he was involved in maintaining electronic systems for fighter jets, serving during the Cuban Missile Crisis. William went on to work as a mainframe computer programmer in the early days of the field. Upon his retirement in Florida, he became involved with the Zephyrhills Elks Club, where he served in many roles, including a term as the Exalted Ruler. William had a big heart and a fun sense of humor, enjoying the company of family and friends, a good meal, and a cold beer.

A memorial service will be held at a future date. In lieu of flowers, donations can be sent to the Zephyrhills Elks Club (BPOE #2731 PO Box 1406, Zephyrhills, FL 33539-1406 with checks payable to BPOE #2731 specifying The Bill Knapp Scholarship Fund in the memo).