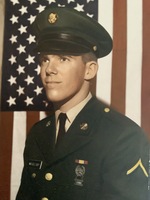 William M. Moselsky, 71, of Enfield, beloved husband of Jean (Dobson) Moselsky, passed away on Sunday, January 3, 2021 at Hartford Hospital. Born in Hartford, CT on March 17, 1949, he was the son of the late Roland Moselsky and Mildred (Cohen) Benoit and grew up in Windsor Locks before moving to Enfield upon marrying Jean. Besides his wife Jean of 45 years, he leaves 2 sons, Jason Moselsky and his wife Megan of NH, Justin Moselsky and his wife Kireen of Middletown; his brother Richard Moselsky, his step-brother Gary Moselsky; 2 sisters, Jan Hanson and Susan Cabey; and his step-father Ronnie Benoit. Besides his parents, he was predeceased by 2 brothers. Bill was a loving and caring husband and father who truly cherished his family. His smile and mastery of trivial knowledge will be missed. Bill was a proud veteran of the Vietnam War. He was a retired Teamster spending the majority of his career in distribution most recently with UPS. His family will receive friends on Saturday, January 9, from 9-10 AM at Leete-Stevens Enfield Chapels, 61 South Rd., Enfield. A Graveside Service with Military Honors will follow in Hazardville Cemetery, Enfield. For online condolences, please visit www.leetestevens.com.